A busy weekend in Glynn County Athletics is almost here.

Today, we take a look at the action coming up over the next several days in the sports noted above.=

The Brunswick High and Glynn Academy girls and boys teams will all be in action in their respective  state tournaments on Friday.

Three teams will play at home including both Glynn Academy squads and the Brunswick girls.

Glynn is 22-4 for the season while Mt. Zion will visit TerrorTown with a 17-10 season record after finishing fourth in Region 4. The Lady Bulldogs fell 51-47 last week to Stephenson in the region third-place game.

The BHS girls also will play at home at 6 p.m. Friday against Stephenson. The Lady Pirates are 17-9 whle the Lady Jaguars are 19-9 on the year. Brunswick settled for second in the region after falling in the tournament final to Glynn while Stephenson won its region’s third-place game over the aforementioned Mt. Zion.

The Brunswick boys will be on the road for their opening round game against Lovejoy which finished second in Region 4 behind Tucker which knocked off the Wildcats 64-60 in the region title game last week.

The first-round winners will move on to the second round, which is the Sweet 16, next week.

The 2019-2020 wrestling season will come to a close for Glynn Academy and Brunswick High this weekend at the Class AAAAAA tradional meet in Macon.

The Macon Centreplex will host the tournaments for all Georgia High School Association classifications. The tournament schedule can be found at www.ghsa.net. while interested fans can view the action for an affordable subscription fee on NFHS Network.

At the meet, wrestlers compete for the individual state titles in their weight classes while accumulating points for their teams as team champions will also be named.

A yearly tradition will be renewed this Friday and Saturday when Brunswick and Glynn Academy combine to host the two-weekend Baseball at the Beach tournament.

Games are scheduled for Friday and Saturday on Bud Couch Field at BHS, Adam Wainwright Field next to Glynn Middle School which is the home of the Terrors and also Historic Edo Miller Park off L Street.

The tournament schedule is shown below.

Baseball at the Beach was started by former Brunswick coach Jimmy Brown along with longtime Glynn coach Chuck Fehr, and each year features teams from Southeast Georgia competing against programs from metro Atlanta.

This year, Glynn is taking on Gainesville at Wainwright Field at 7 p.m. Friday. On Saturday, Glynn will again be at the Waino for a 4 p.m. matchup against North Forsyth and a 7 p.m. game against Banks.

Meantime, Brunswick wil play twice on Saturday, taking on Sandy Creek at 4 p.m. followed by a matchup against neighbor Camden County at 7 p.m.

Glynn and Brunswick both opened the new season Monday at home. The Terrors went 11 innings for a 1-0 win over Camden. The Pirates fell 3-1 to Wayne County.

On the pitch, the Brunswick boys are set to hit the road Thursday for a match at Groves. The Pirates are 2-0 early with wins over Ware County (3-0) and McIntosh County Academy (10-0).

The BHS girls also will play at Groves today. The Lady Pirates dropped their opening match on Feb. 3 as they fell 4-0 to Ware County.

The Glynn boys are off to a 2-0 start to their season. The Terrors ripped Tattnall County 11-2 back on Feb. 4 before posting a 4-0 win on Tuesday over Benedictine.

The GA girls are 1-0. After a 9-1 preseason scrimmage win over Camden, the Lady Terrors blanked Lakeside by 6-0 last Friday.

Both Glynn teams will play Effingham at Glynn County Stadium on Tuesday. 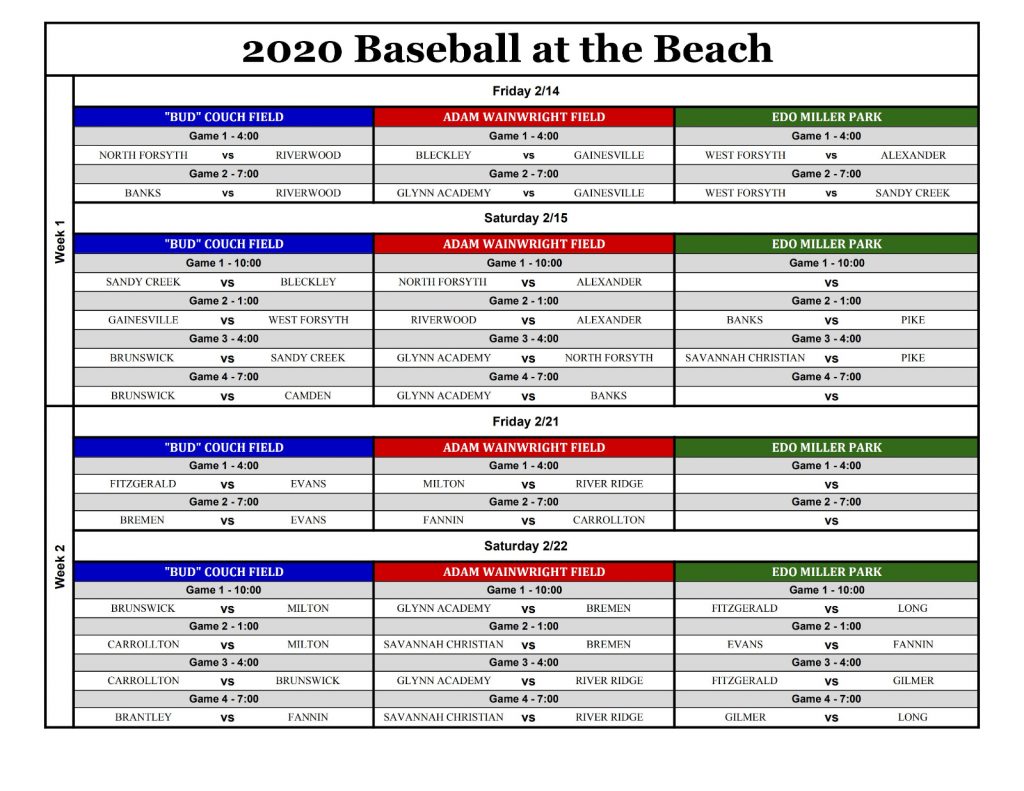