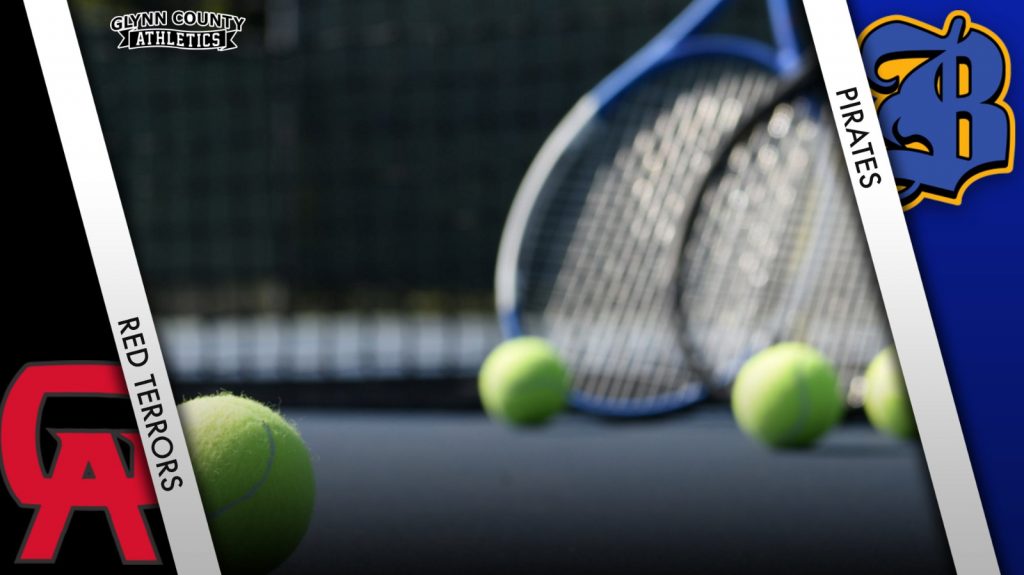 The high school tennis season was under way for the teams at Brunswick High and Glynn Academy when play was suspended indefinitely due to the coronavirus scare last month.

That meant that the Glynn and BHS teams would not be hitting any more forehands and backhands in competition in their school colors this spring.

As Glynn County Schools Athletics has done the last several weeks with other local spring sports teams, today we take a look at how the Red Terrors and Pirates were doing on the tennis courts when the season was suspended in mid-March.

The GA girls and boys were under the leadership of first-year coach Marcus Long this spring, but it was business as usual on the courts for the Lady Terrors and Terrors who were looking to contend for the Region 2-AAAAAA championships and make a run in their respective state tournaments.

“It’s been difficult. It’s been a really tough time,” said Long who coached for 13 seasons at Camden County before coming to Brunswick to teach and coach this school year. “We had nine seniors, so it’s just been depressing for them.”

The Glynn girls were off to a 7-1 start and were the prohibitive favorite to claim another region title this season.

“I can’t tell you the last time they didn’t win a region championship,” Long said with a chuckle. “Our kids are used to winning. I was blessed to come in and have kids with experience and great leadership qualities.”

The Lady Terrors featured senior Leanna Wood at No. 1 singles and senior Florence Thompson at No. 2 singles along with sophomore Liza Zeh who started in the No. 3 singles slot.

Also contributing to the team as a doubles player was junior Molly Mitchell.

The Glynn boys owned a 4-4 record when play was halted. Long pointed out that the Terrors faced some stiff early-season competition at the annual Jekyll Jam tournament while noting two of the team’s losses came in matches that were decided by the final contest on court.

“We were in a little bit of a rebuilding mode, but we could have easily been 6-2 or even 7-1,” Long said. “The guys were doing well, and we had good leadership on our boys team as well.”

One of Glynn’s close setbacks was a 3-2 loss to Richmond Hill just before the season was suspended.

Richmond Hill won the region title last season, and the Terrors were hoping to get another shot at the Wildcats in the region tournament while perhaps reversing the score against the defending league champions.

“It was nip-and-tuck, very close,” Long said of the match at Richmond Hill. “I had a good feeling we would be ready for them if we saw them in the region tournament.”

The Glynn team included five seniors. Those were Ethan Talab and Christian Molloy who combined to make up the No. 1 doubles duo, Christian Culver who started at No. 2 doubles, Nicholas Lynch who played several singles positions early on and Ethan Ashworth who was playing doubles for the Terrors.

The team’s juniors were John Rooks who was starting at No. 2 doubles and Jaben Hardin, a mid-season transfer who played in only one match before the season ended.

Glynn’s roster also included sophomores Gavin Pavone, a starter in the top two singles spots, and Tyson Rooks who started at No. 3 singles.

The team’s lone freshman was Hayes Chitty who saw starting time at Nos. 1 and 2 singles.

Looking toward the future, Long said the girls will be in a bit of a rebuilding mode next year but the boys will return a deep and talented roster.

“Our girls team will have some talent coming back. We’re just low on numbers right now,” Long said. “But we have some girls on our JV team who will work hard this summer. Our boys program has kids on the JV team that would be starting on varsity in other places, so we’re stocked with some talent.

“We’re going to miss our seniors and we’ll never forge them. They’ve been through a lot, and I’m their third coach in four years. We never would have gotten our program off the ground without them.

“I’m excited about the future, though. I know when I first got to Camden, Glynn was the measuring stick and we built that program up. The opportunity to come here has been kind of surreal for me.”

Tommy Beck was just getting going with his sixth season as coach of the Pirates and Lady Pirates when the teams had to come off the courts.

But the BHS coach was already seeing improvement among the players on both teams since the teams came together for preseason practices.

“Our first three matches all got rained out, so we had only played two or three matches,” Beck said. “All of our players give 100 percent, but sometimes it’s just a struggle against some of the better teams.

“We get a lot of first-time players here or players with a little experience, but that’s a fun challenge for me. We always make tremendous progress from the start of the season to the end, and the players love it. My goal with BHS tennis is that I want to teach the kids the game and I want to see them playing and enjoying the game later in life, too.”

Beck said his players this year were committed to improving their individual skills.

“They stayed after practice and hit balls and they were getting together on weekends and playing outside of practice and matches,” he said.

Beck lauded the early-season play of sophomore LyZavia Holloway for the Lady Pirates.

“She won all three of her matches at No. 1 singles,” the coach said. “She was doing a good job. She did a good job last year as a freshman. She played No. 2 singles last year.”

“She was our team captain. She did well,” Beck said. “She really took charge of the team. She was a great leader, led by example.”

“Carson played tough in his matches. He was doing well,” Beck said. “Jamaal was playing No. 1 doubles. He came out last year as a beginner. He’s a good athlete, super quick. He gave everything he had.”