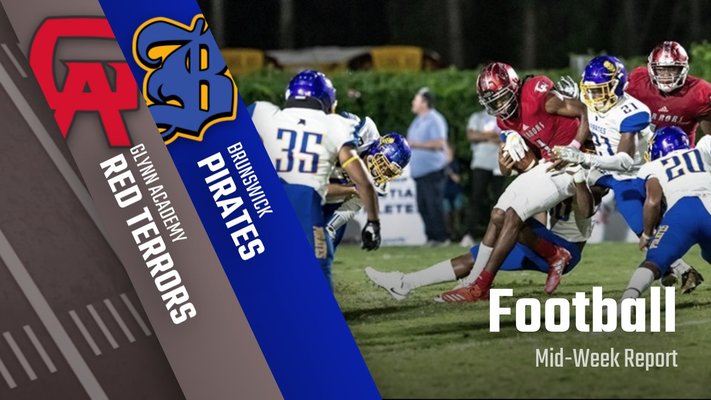 Each week during the 2020 high school football season Glynn County Athletics will announce the Players of the Week for Brunswick High and Glynn Academy from the previous week’s games and will look ahead to the upcoming games for both the Pirates and Red Terrors.

PLAYERS OF THE WEEK

His game: Hunt was forced into varsity action as a freshman due to injuries to starters along Glynn’s offensive front. He performed admirably against a strong defensive line for Coffee which defeated the Red Terrors 45-7 in Douglas.

Coach’s comment: ‘’Before the game, I went over and asked Jack if he was nervous,” said GA head coach Rocky Hidalgo. “I expected him to say he was fine, but he took out his mouthpiece and said,

‘Yeah, coach. I’m nervous.’ He was honest. But, you know what? All things considered, he played well, going against the guy he went against all night on a pretty good defensive front for them.”

His game: Williams is listed as a defensive back and receiver for the Terrors, but is now needed more in the GA secondary which has been depleted by injuries. Williams played well for the Terrors in the road loss at Jardine Stadium.

Coach’s comment: “He’s doing a good job for us as we try to figure things out back there,” Hidalgo said.

A look at Glynn Academy:

Fun Fact: Former Red Terror standout Deejay Dallas made his NFL debut this past Sunday with the Seattle Seahawks. He rushed two times for 8 yards and caught two passes for 15 yards as the Seahawks defeated Miami 31-23 to go to 4-0 on the season. Seattle drafted Dallas, a running back, in the fourth round of the 2020 NFL Draft.

A look at Brunswick High:

Fun Fact: Brunswick standout Warren McClendon, a senior on the 2018 Pirates team, made his first career start on the offensive line for the Georgia Bulldogs this past Saturday night in their win over rival Auburn in Athens. He is the nephew of former Glynn Academy standout and UGA great Willie McClendon who attended Warren’s signing ceremony at BHS when he inked his scholarship papers with the Bulldogs,

Friday’s game begins the so-called second season for the Terrors and Pirates as it kicks off the region schedule for both teams.

Of course, bragging rights for the next year and a city title are on the line as usual. And this year, the winning team will regain the overall lead in the long-running series which is currently all tied up with both teams showing 37 victories and 37 losses with two tie scores in the previous 76 meetings between the local teams.

Glynn comes into this year’s game on the heels of a lop-sided defeat last Friday at Coffee which took charge early and overpowered a GA team which has been hit hard by injuries to key players on both sides of the ball.

But remember, the Terrors limped into last year’s City Championship Game, having lost three in a row including embarrassing losses against Ware County and Camden County at home. Yet, they rebounded in time to come from behind and score a 24-21 win over the Pirates on a field goal as time expired to claim a sixth straight win in the series and retire a second consecutive city crown.

With another victory Friday night over BHS, the Terrors would establish a new record for most consecutive officials wins by either side in the rivalry as both teams have won six in a row once each during the course of the series.

The number of would-be starters who will be wearing masks because of Covid-19 and watching from the sidelines due to injuries, though, is a major issue for the Terrors.

Glynn has lost three starters along the offensive front since the opening game which has hampered its ability to run the ball with consistency in its shotgun-option offense which is designed to have a strong rushing attack.

The GA defense has had its secondary decimated by season-ending injuries to two starters while another starter was also lost to a medical issue.

The good news for the Terrors is that linebackers Miles Smith and Tywon Melvin who missed last week with injuries should return and help solidify the middle of the defense.

And as for the offense, Glynn does still have players who can make big plays at any time including senior quarterback TJ Lewis who is committed Louisville, senior running Caden Hutchinson and sophomore receiver Jayden Drayton.

Lewis scored the game-winning touchdown in the fourth quarter at Winder-Barrow on a 25-yard run. Hutchinson sped 96 yards for a score in the loss at Camden, and BHS is well aware of Drayton’s play-making talents. He raced 81 yards in last year’s City Championship contest for a touchdown in the third quarter that tied the score at 14-all going into the final stanza.

Of course, the Pirates know all about injuries themselves. They lost their top running back, junior Chuckobe Hill, to a knee injury, early in the season opener at Pierce County. Brunswick is hoping he can return during region play, but his status remains uncertain for now.

The Pirates have turned to fellow junior Ree Simmons to be their workhorse runner, and Simmons has delivered for the team during the early portion of the season. He carried for 75 yards and a touchdown on just 12 attempts against McIntosh County Academy before rushing for 195 yards against Benedictine and 184 at Northeast Macon. Simmons has carried for 505 yards and four scores in four games and is averaging 6.6 yards per attempt.

An experienced offensive line led by senior tackle and Georgia Southern commit Caleb Cook and junior tackle Kanaya Charlton is paving the way for Simmons and his fellow BHS runners.

Senior receivers Xavier Bean and Tyrease Jones both have double-digit reception totals as senior quarterback KJ Lee has completed 65 percent of his passes.

The BHS defense has improved since the loss at Pierce and is allowing opponents 17.5 points a game.

Kashawn Thomas, a sophomore nose guard with a South Carolina offer, is standing out on the defensive front. BHS has four senior linebackers – Zane Rosenbaum, Cameron Crump, Bryce Morris and A.J. Wilson. The secondary includes Amarion Whitfield who now is likely to play more in the defensive backfield than on the offense to help bolster the back end of the defense.

The Terrors have only played at GC Stadium once this season while Brunswick has played on the home field twice.

Of the eight combined games that the two teams have played to date, only three have been at the local stadium. Glynn beat McIntosh County Academy at home on Sept. 4, and BHS defeated the Buccaneers here the following week. The Pirates played the only other game between the bricks on Sept. 18 when they fell tough to Benedictine.

There has not been a game at the home field since that Sept. 18 game between BHS and BC, but either BHS or Glynn will play a home game every week but one for the remainder of the 2020 regular season.