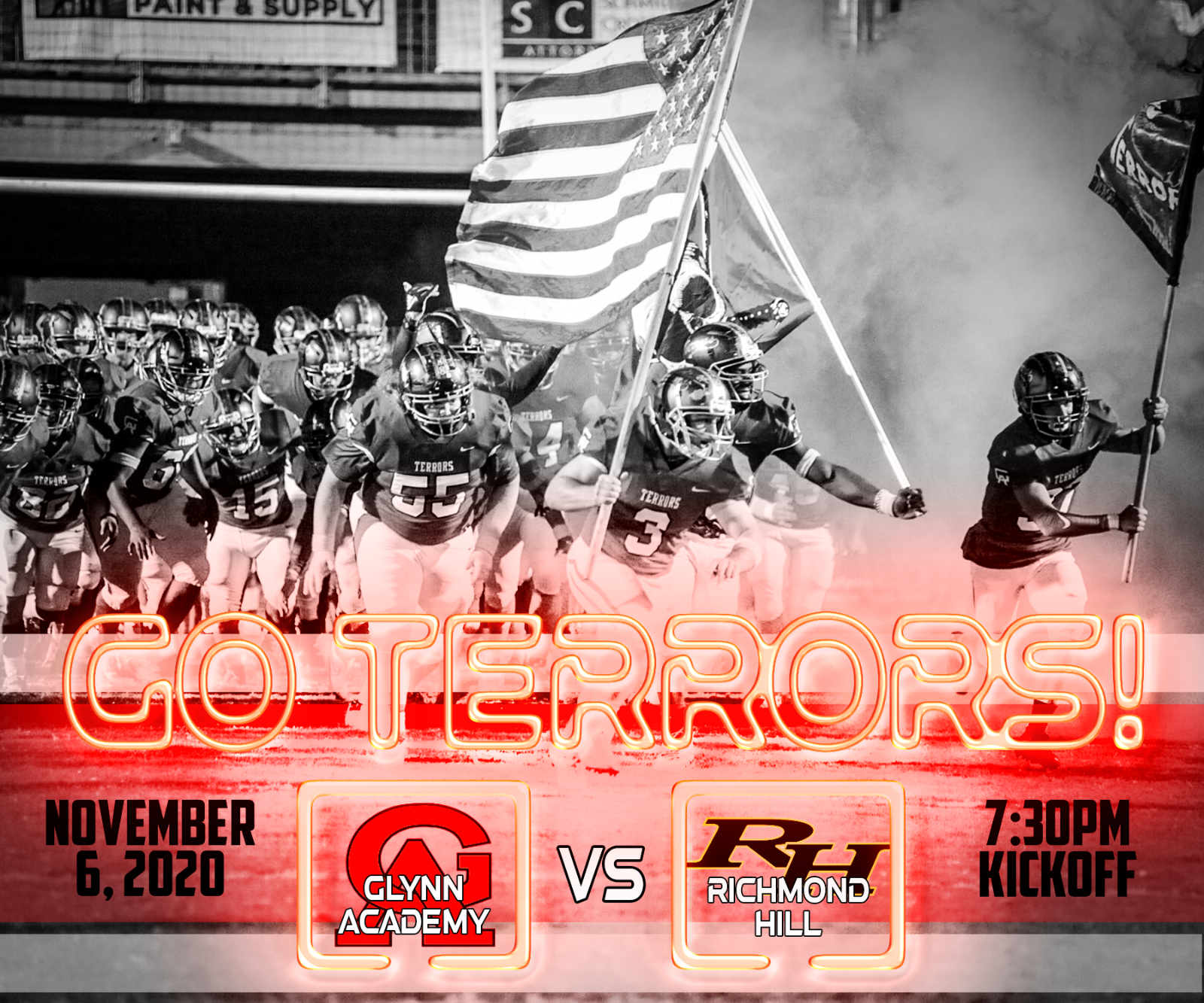 Each week during the 2020 high school football season, Glynn County Athletics will announce the Players of the Week for Glynn Academy from the game the previous week and will look ahead to the upcoming game for the Red Terrors.

Players of the Week

From Glynn Academy’s 38-0 win this past Friday at home over Effingham:

His game: Rhodes played well for a Glynn offense that posted 31 first half-points and totaled 447 yards on the night as the Red Terrors moved the ball at will against the Rebels in the Homecoming game at Glynn County Stadium.

Coach’s comment: “Quammy played his best game and was really physical at the point of attack,” said Glynn head coach Rocky Hidalgo. “His improvement at offensive guard is a big reason our offensive production has improved.”

His game: Drayton, who started on both sides of the ball for the Terrors, played well against the run and did a solid job in pass coverage for the Terrors who shut out the Rebels.

Coach’s comment: “He has been one of our most steady performers on both sides of the ball,” Hidalgo said. “He has been exceptional in both coverage and against the run over the past few weeks.”

A look at the Terrors’ next game:

Fun Fact: This is the 10th season as a head coach for Richmond Hill’s Matt LeZotte who spent four years at Aquinas from 2009-12 and never had a losing season while winning nine games in 2011 and reaching the Class A quarterfinals. He has been head coach at Richmond Hill for six years now and is headed for his fourth winning season in that time. He led the Wildcats to nine wins last year, their second-ever region title and first-ever state semifinal berth. They can tie the school record of 10 wins with three more victories this season.

The Skinny: Richmond Hill can capture a second straight region championship with a victory over Glynn.

The Wildcats would remain unbeaten in the region with a win and could then do no worse than a tie for first with Brunswick even if they were to lose their final league game next week against South Effingham. Richmond Hill would still claim the title and the region’s top seed for the state playoffs because the Wildcats defeated the Pirates last week in the head-to-head meeting between the teams which would be used to break the two-team tie.

The other teams in the region all have either two or three losses already.

So, if Richmond Hill, Glynn and Brunswick were to finish tied atop the region standings with the one region loss each, another tiebreaker would come into play to determine the champion and top seed for the playoffs. The tiebreaker would be the total points allowed in region games between the teams involved in the tie. Thus, the only games used in this scenario would be Glynn-Brunswick, Brunswick-Richmond Hill and Richmond Hill Glynn.

Also, the maximum amount of points allowed in any game is capped at 25, which means Brunswick and Richmond Hill would only be charged with allowing 25 last week when the Wildcats defeated the Pirates 42-27 on the scoreboard after four quarters of action on the field.

Obviously, Brunswick has already played both Glynn and Richmond Hill. The Pirates gave up a total of 46 points (25 versus Richmond Hill and 21 against Glynn as they won that game 24-21).

For Glynn to finish as the league champion and earn the top seed, the Terrors would thus need to defeat Richmond Hill and hold the Wildcats to 21 points or less on the scoreboard. Remember, they gave up 24 points in the loss to Brunswick, so that would leave the Terrors giving up no more than 45 points in the games against BHS and Richmond Hill and that would be better than Brunswick’s 46 total.

Between the playing lines Friday, Glynn has to be concerned about blocking Richmond Hill’s heralded defensive front led by all-state candidates Nathan Vickers, the returning Region Defensive Player of the Year, and Shaquon Brooks, a fellow senior tackle. They combined for 17 tackles and four sacks last week in the victory over the Pirates.

Richmond Hill also has big-play ability in the passing game, featuring senior quarterback Tyler Coleman and several talented receivers. The running game is led senior Ashaud Roberson who is averaging 136.4 yards per game and has carried for at least 100 yards in all eight games this season for the Wildcats. He has rushed for 1,091 yards and 11 touchdowns thus far.

The Wildcats’ senior kicker Britton Williams also has a big leg. He is a perfect 39-for-39 on extra-point kicks for the season. His longest field goal is 42 yards, but he can make a field goal longer than 50 yards which he did in the team’s preseason scrimmage.

Glynn looked as good as it has all season last week in all three phases of the game as the Terrors trounced Effingham 38-0 in the annual Homecoming game.

On offense, a rebuilt offensive line paved the way for the Terrors to post 31 first-half points. Senior quarterback TJ Lewis ran for 100-plus yards on limited carries and also threw a touchdown pass.

Senior running back Caden Hutchinson remains a threat as a runner and pass-catcher out of the backfield. Jayden Drayton, Nevarious Williams and D’marion Hayes can also run and catch the ball for Glynn.

It will be interesting to see if the Terrors make backup quarterback Tyler Devlin part of the game plan against the Wildcats. Last week, he threw a touchdown on a double-pass and also threw another touchdown pass while taking snaps for Glynn in the first half.

Glynn appears to be fairly healthy on defense. The secondary, which had to be reconstructed following season-ending injuries to key starters, performed admirably last week. Drayton, who is starting at defensive back following the losses in the secondary, was named the team’s defensive player of the week for the Effingham game last  week.

The Terrors also had a interception last week while doing a good job in coverage against the Effingham receivers.

Glynn, of course, shut out Effingham on the scoreboard.