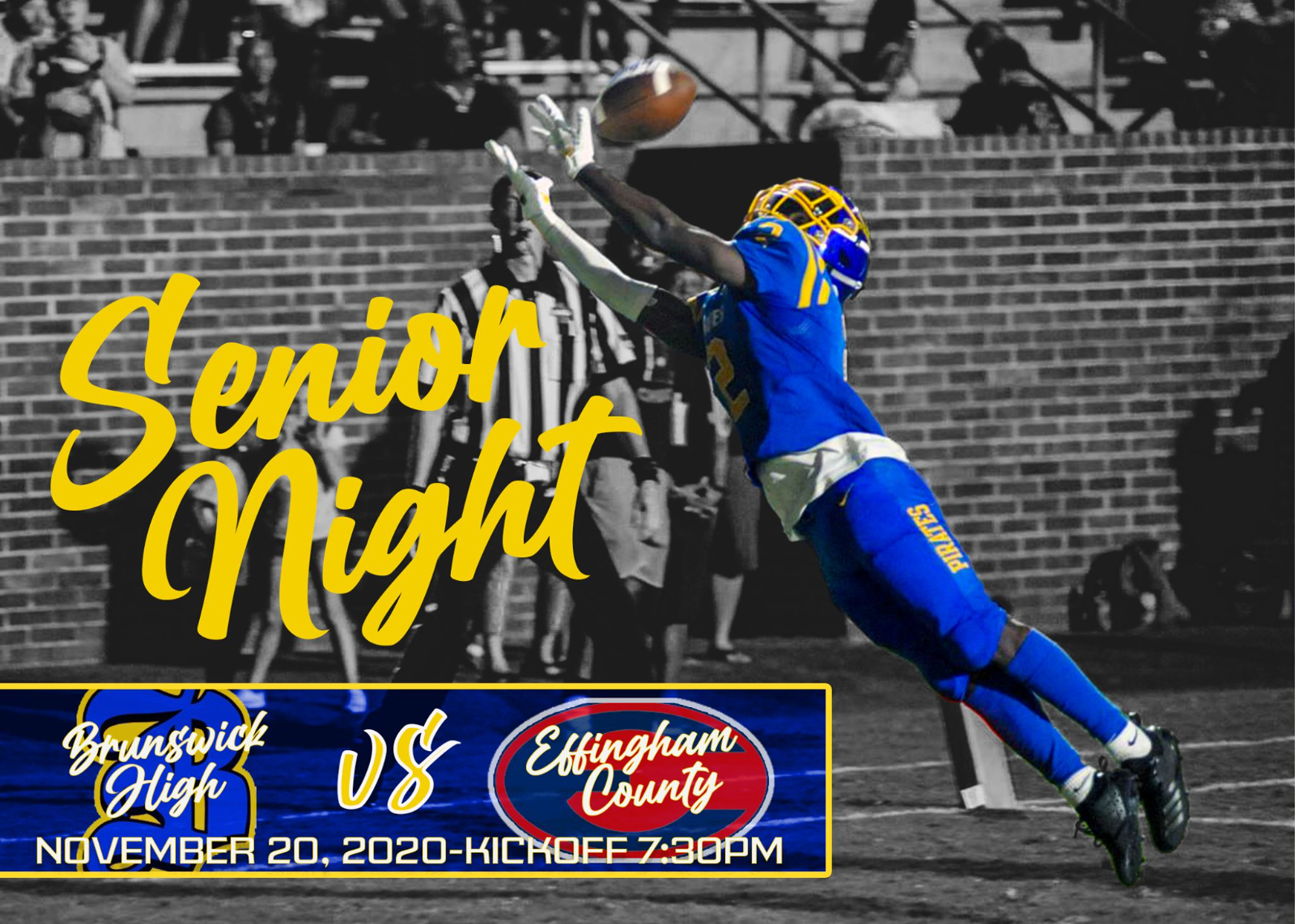 Each week during the 2020 high school football season, Glynn County Athletics will announce the Players of the Week for Brunswick High from the game the previous week and will look ahead to the upcoming game for the Pirates

Players of the Week

From the 28-12 win last Friday at Bradwell Institute:

His game: Jones had another big game catching the ball for the Pirates. He had seven receptions for 149 yards and two touchdowns. One of his touchdowns came on a 60-yard catch on Brunswick’s opening possession.

Coach’s comment: ‘’He’s having a great year,” said BHS coach Sean Pender. “He had six catches in the first half and one in the third quarter. He didn’t play the fourth quarter.”

His game: Wilson led the Brunswick defense in tackles against the Tigers. He finished with eight solo tackles while also recording an assist, a sack and one tackle for loss.

A look at the Pirates’ next game:

Fun Fact: The first four games of the Brunswick-Effingham series featured at least one different head coach on one side of the field. In the 1978 game, the first one between the schools, Jonathan Williams was the head coach at BHS and he led the Pirates to a 42-7 win over Elwood Baker’s Effingham team. The next year, Frank

Springer coached his only season with the Pirates and they lost 7-0 to Baker’s squad.

In 1980, John Willis led his first BHS team to a 28-21 home win over Baker’s Effingham squad. In 1981, Bob Griffith would take over at Effingham and his first team would lose to the Pirates 28-14 in Springfield before going on a five-game winning streak in the series.

BHS is on its fourth coach since Willis retired following the 2001 season while Effingham is on its second since Griffith stepped down in 1998.

The Skinny: This will definitely be the last game for Effingham which will not make the playoffs. The game will also be the last for Effingham head coach Buddy Holder who announced his resignation prior to the Rebels’ game last week at Statesboro.

The Pirates have qualified for the playoffs, but their seeding remains in question going into the regular-season finale. That will be decided based on their result against the Rebels and the final score of Glynn Academy’s game at Statesboro on Friday.

The night will start with the Pirates and Red Terrors tied for first in the Region 2-AAAAAA standings with Richmond Hill with one league loss each. The Wildcats finished their regular-season schedule last week. If Brunswick and Glynn both win, the three teams would share the region championship as they all three defeated each other during the season. Brunswick topped Glynn which beat Richmond Hill which defeated Brunswick.

However, Glynn would be awarded the No. 1 seed for the Class AAAAAA state playoffs based on the next tiebreaker instituted which is points allowed in games between the teams involved in the tie. The Terrors allowed fewer combined points to Richmond Hill and Brunswick than those two allowed in their games against Glynn and each other.

Then, because Richmond Hill beat the Pirates in their head-to-head meeting, the Wildcats would be the No. 2 seed for the state playoffs which guarantees an opening-round home game and Brunswick would be the No. 3 seed and would have to go on the road in the first round.

If Brunswick were to beat Effingham on Friday and Glynn were to lose at Statesboro, Richmond Hill would win the region and be the top seed based on its victory over the Pirates. Brunswick would then be the No. 2 seed. Glynn and Statesboro would both have two region losses, but the Blue Devils would get the third seed because of their win over Glynn and the Terrors would wind up fourth in this scenario.

If both Brunswick and Glynn were to lose Friday, Richmond Hill again would be the region winner and top seed. The Pirates, Terrors and Statesboro would all then have two region losses and be tied for second in the standings. Brunswick, though, would get the No. 2 seed because the Pirates beat both Glynn and Statesboro head-to-head. Then, Statesboro would be third because it beat Glynn, and the Terrors would be relegated to the fourth spot in this scenario, too.

For what it’s worth, Brunswick is a 34-point favorite over the Rebels in the Maxwell Ratings released today by Georgia High School Football Daily. Glynn is favored by 13 points at Statesboro, according to the Maxwell projections.

The Rebels gave an inspired effort last week after their coach made it known he would be stepping down following the season. They also had to win the Statesboro game to have a chance at making the playoffs.

Effingham scrapped the offense in had been running in favor of a pass-happy spread attack and gave the Blue Devils all they wanted, taking them to the wire before falling 35-33 at Womack Field in Stateboro.

The Rebels scored inside the final three minutes to pull within the two points, and then recovered their ensuing onside kick to go back on offense. They drove to the Statesboro 32-yard line before the Blue Devils could stop them and escape with the narrow win which they needed to lock down a playoff spot.

For the game, Effingham quarterback Zach Garcia was 26-for-42 passing for 350 yards and four touchdowns. He also ran 38 yards for a touchdown.

The Rebels did surrender 350 rushing yards to the Blue Devils who had three rushers gain more than 100 yards on the night.

Speaking of rushers, Brunswick’s Ree Simmons is still looking to surpass the 1,000-yard mark before the end of the regular season. Last week, he ran just eight times for 29 yards and a score in the victory at Bradwell, raising his season rushing total to an even 900 yards in nine games. He needs 100 yards Friday against the Rebels to reach the milestone mark in 10 games. He also has nine rushing scores on the season.

With his two touchdown grabs last week, senior wideout Tyrease Jones now has 11 scoring catches for the season. Jones has 30 receptions for 634 yards and averages just over 70 yards receiving a game.

The Pirates will honor their seniors prior to Friday’s 7:30 p.m. kickoff.