Glynn Academy was showered with two major individual awards while both the Glynn and Brunswick High football teams were well-represented when the All-Region 2-AAAAAA honors were announced Tuesday by the region.

The superlative award winners and the All-Region teams were voted on by the head coaches from the seven schools that make up the region. All of the individual winners as well as the region first- and second-teams can be found below.

The Terrors and Pirates both finished 8-4 this season and reached the second round of the Class AAAAAA state playoffs before being eliminated this past Friday night. The local squads finished in a three-way tie for first in the region standings with Richmond Hill as all three teams lost one league game each with Brunswick defeating Glynn which defeated Richmond Hill which toppled the Pirates.

Glynn was awarded the region’s top seed for the playoffs through a tiebreaker procedure, Richmond Hill then got the second seed due to its head-to-head win over BHS which settled for the third seed.

Several other BHS and GA players were named for honorable-mention recognition . Those players are included in the complete team listing below. 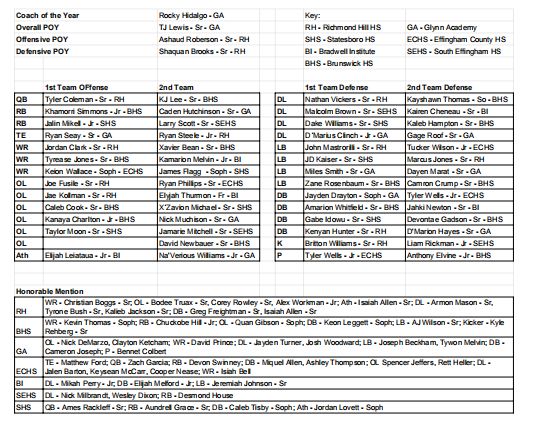